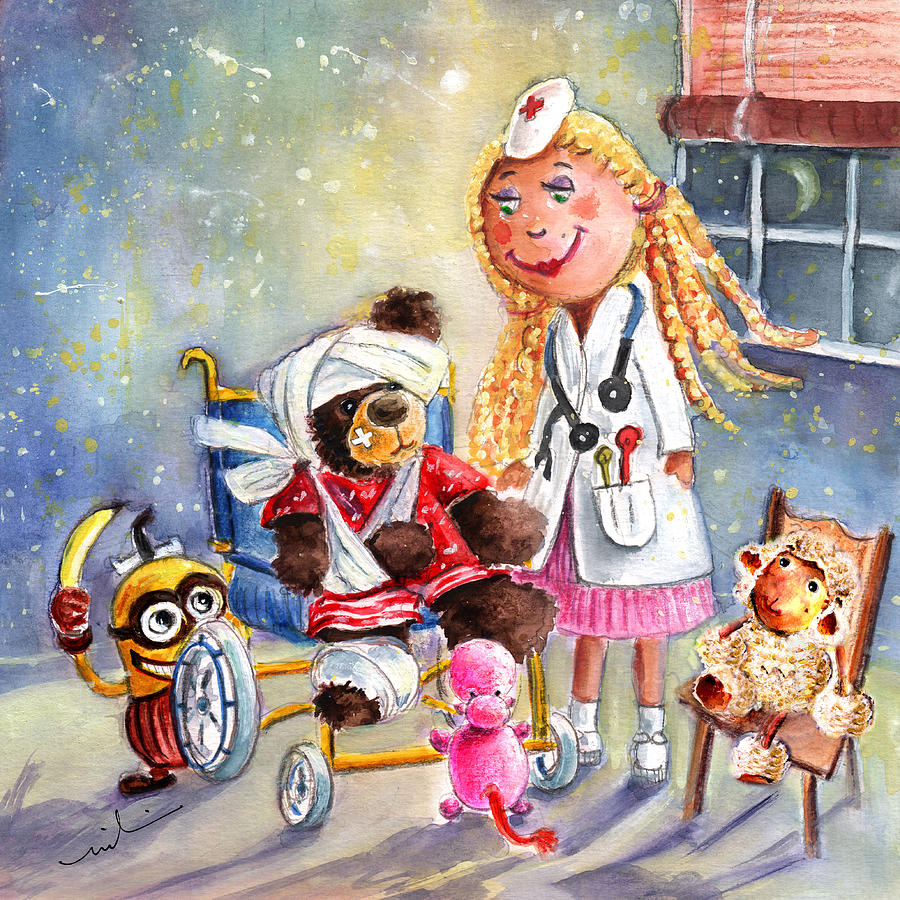 Truffle McFurry And The Minion

This original painting is currently for sale.   At the present time, originals are not offered for sale through the Miki De Goodaboom - Website secure checkout system.   Please contact the artist directly to inquire about purchasing this original.

Truffle McFurry And The Minion

Funny painting of Truffle McFurry sitting in a wheel chair with broken arms and legs, surrounded by his pet the pink hippopotamus, Mary the Scottish sheep, a lovely nurse and a Minion with a banana.
Truffle tells the story:

"The other day Kevin came back from a gig in Germany and brought back a weird thing called "Minion". He said, a waiter from McDonald in Germany had come to his table, asked him if he was the singer from Witch Cross (Kevin's heavy metal band) and as Kevin said yes, he gave him that Minion as a gift.

Well, Minion is a weird thing, as I said. To start with, he is not a softie as we all are in the house, he is so hard, his skin is made out of hard plastic. I don't like to touch him at all!
But worst, he is holding a banana in his hand, and spends his time chasing me through the house waving his banana with a sadistic smile on his ugly face, as he wanted to beat me.

And then it happened: the other night I had a nightmare, dreaming that Minion was beating me to death. And trying to escape, I fell out of the bed, on the hard ceramic ground! This was not part of the dream, I did awake on the ground, feeling miserable, and everything in my poor little body was broken!

They put me on a wheel chair and Miki pulled me home.

Luckily the nurse, Gilda, is very lovely. She has a mouth in form of a heart, this is so cute! She comes to visit twice the day, and change all my bandages. The good thing is, that everybody feels sorry for me, and I get spoiled a lot, and they all say many lovely things to me. Only Mary is a bit upset, I think she is a bit jealous of sweet Gilda...

And Minion? Well, he keeps trying to get to me, but now at least he can't reach me! Anyway, Miki promised me to get rid of him, we all don't want him in the house any more. Except Kevin. Kevin says, one does not throw gifts away... I understand that... then at least we should put him in a locked cage... not Kevin, that bloody Minion!